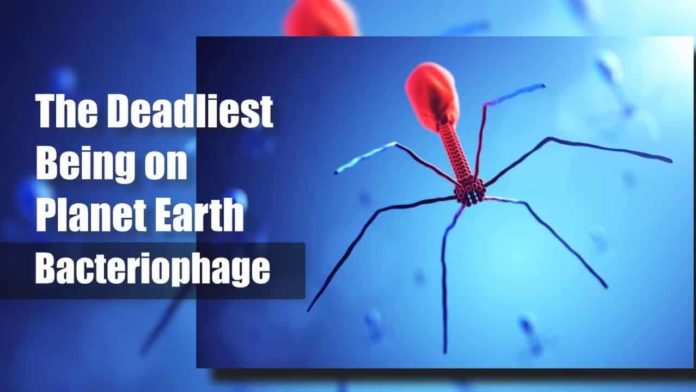 Bacteriophage – The Deadliest Being On Planet Earth

Ever wondered how true the saying is, “You’re the predator right up until you are the prey”. That is what life is all about –where every predator is someone’s prey and every prey is someone’s predator. It is all the consequence of evolution bringing in variation, diversity and complex interactions among living beings in-turn fueling more evolution. So, evolution is the driving force, evolution is the process and evolution itself is the outcome. A quite interesting cycle of nature which is so productive yet so merciless.

Welcome to today’s Podcast where we will understand one such interesting outcome of evolution, “The Deadliest Being on Planet Earth – The Bacteriophage”, presented by Biotecnika team member Sunita.

Evolution is at work that we can very easily say looking at the diversity of life around us. Life began as a so-called LCA -Last Common Ancestor and flourished into millions of diversified species. And one of the so-called most evolved and dominant species today is Homo sapiens. But this most advanced and dominant species have also time and again fallen prey to tiny microscopic prokaryote – bacteria. Throughout human history, there are multiple accounts of deadly epidemics and pandemics caused by bacterial pathogens almost wiping out its existence. Hence, we can say it is a deadly organism, though less evolved yet so powerful, posing a constant potential threat to the great and mighty human race.

But is this minuscule-1 um- bacteria existing in trillion of trillions in number all immune, all invincible and all immortal?

No, there is someone to challenge it, someone who preys on it and that is the bacteria eater – Bacteriophage. Also known as phages are a type of viruses, they are obligate intracellular parasites of bacteria. The first description of phages was given by Frederick Twort in 1915 who observed characteristic zone of lysis in bacteria which is associated with phage infection. Latter Felix d’Herelle independently identified the source of this phenomenon and attributed the plaques to bacterial viruses. Subsequently, the term “bacteriophage” was coined by him.

They are highly abundant in nature existing approximately in total about 1031 in number. It is more than any other species on earth, even all the bacteria collectively cannot match this towering number of viruses. On the contrary, they are tinier than their prey and are visible only under scanning electron microscopy – mostly their size ranging in nanometers. Phages are available in diverse habitats like oceans, hot springs, soil, glaciers, even human intestine. In terms of form, specificity, and function their diversity is unmatched in nature.
And the most interesting aspect of a phage is that it is considered at the borderline of living and non-living. This is because Bacteriophage does not have any elaborate cellular component as found in the case of prokaryotes and eukaryotes. Phage architecture is quite simple – a protein capsid containing a simple genetic material in the form of DNA or RNA. So even though they possess genetic material but have no means of propagating it. Thus, they are completely dependent on their host i.e. the bacteria for their propagation.

Phages float around waiting for the encounter with a specific host. When they collide with any bacteria, their attachment will be dependent on the availability of specific receptors on the bacterial surface. Likewise, phages also bear special equipment like tails, hooks, etc. which helps them to bind the bacterial receptor. Attachment is followed by injection of the phage genetic material into the bacterial cell. There is two distinct fate of this phage genetic material- lytic and lysogeny. First one is where the bacterial machinery will be hijacked and deployed for replication of phage genome and expression of phage genes, ultimately leading to the assembly of new phage particles. When numerous new phage particles assemble inside the host approx. 1000 or so, then bacteria are lysed, and the phages are released. Second fate is where the Bacteriophage genome inserts itself into the host genome and passively replicates along with it. During this more parasite like existence, the phage genome is passed down from mother host to daughter vertically. Phages which follow lytic life cycle known as lytic phage and which follow lysogeny are called temperate phage. Temperate phages can often shift to a lytic life cycle depending on the various environmental conditions.

So, preliminarily the propagation of phages requires the destruction of bacteria. Almost every second approx. 2 x 1016 phage mediated gene transfer in bacteria occurs globally. Such a huge extent of bacterial attack by phage accounts for the destruction of nearly 40% of bacteria available in the ocean every day. Hence phages play a very significant yet invisible role in the biological world and ecology as well as evolution. Being an active part of the microbial food chain, their role is indispensable in the maintenance of bacterial population turnover and recycling of elements like carbon, nitrogen, etc. in nature. Concurrently this predator-prey relationship is the working force behind the evolution of both bacterial and phage population. Bacteria continuously develop defenses to evade Bacteriophage infection and survive, while simultaneously phages also create new strategies to break those defenses. Thus, a continuous evolutionary arms race commenced right from their origin millions of years ago has led to the tremendous diversification of both bacteria and phages on the earth.

READ  Top 10 International Biotech Scholarships You Must Apply For!

Further phages play a key role in horizontal gene transfer as they mobilize genes from one host to another. This mechanism is known as transduction, where part of host DNA is packed inside the phage head along with viral DNA. When this phage infects another bacterial host the previous host DNA is transferred to it. This can create variation in gene combinations giving rise to new properties like virulence and antibiotic resistance. Such type of gene transfer is beneficial for bacteria giving it an edge over others in terms of survival, reproduction, and evolution. In fact, one such example is of R-type process and Type VI secretion systems, which are phage tail-like structures encoded by the bacterial genome. These are used for delivering proteins to both prokaryotes and eukaryotes or for killing by puncturing cells. Thus, it can be concluded that Bacteriophage even has the capacity to transform bacteria.

Phages might have a diverse effect but their ability to kill bacteria has proved useful for human. How?

Well, people thought of using phages against bacterial diseases- a therapeutic method termed as Phage therapy. In 1925 d’He’relle reported treatment of plague (four types) by antiplague phages which drew attention towards phage therapy. Many researchers worked on phage therapy and achieved positive results but by the late 1930s, the idea of phage therapy looked no longer promising. Major reasons for this were:

1. The emergence of antibiotics which appeared safer and successful,
2. Early phage therapy experiments were found to be unreliable and inconsistent, and
3. Poor understanding of phage biology and uncertainty over the downstream processing.

But now, we understand phages better and have advanced in the field of biopharmaceutical production. Moreover, with the emergence of antibiotic-resistant bacterial pathogens the world is facing a serious threat of some major pandemic. So, in such a crisis with a paucity of any new effective antibiotic, as an alternative treatment Phage therapy can be employed. Bacteriophage being host-specific do not kill non-specific bacteria, which means only the pathogens will be killed and commensals will be spared. Such type of distinction is not possible in case of antibiotics as they work on all bacteria, thus antibiotics harm the normal microflora. This is an added advantage of phage therapy apart from being harmless as there is no probability of the phages infecting eukaryotic cells. Both natural and modified phages have given promising results in the ongoing clinical trials worldwide.
Phages can be used to destroy the target of pathogenic bacteria. One currently conducted PhagoBurn clinical trial, is at Phase I/II level. This trial is carried out by three European countries and the motive of the trial is to check the safety and efficacy of phages for the treatment of burn wounds infected with E. coli and P. aeruginosa. Similar trials are being conducted in the Netherlands and USA against Listeria monocytogenes for increasing the shelf-life of processed foods.

READ  Drug Use in the Ancient World

Another way in which phages can be employed is for specific targeting of the antibiotics to pathogens. Since phages are host specific so, antibiotics can be conjugated to phages and delivered to specific cells, thus increasing the efficiency of antibiotic therapy. Additionally, modified phages can be developed to inject desired genes which transform the pathogen for example genes introduced can enhance antibiotic sensitivity of the bacteria, improve drug uptake capacity and even repress biofilm formation, in turn, restoring the efficacy of a drug.

And the final approach of phage therapy employs the proteins harvested from phages. Endolysin, tail spike or diffusible polysaccharide-depolymerizing enzymes of phage origin can be used for lysis of specific bacteria or to stop them from forming biofilms, which can reduce the virulence. And all this aid in the easy immune clearance of the pathogen from the body decreasing the chance of infection and disease.

From all these, we can conclude that the most abundant killer on the earth- bacteriophage could be given the tag of deadliest being as it devours mercilessly numerous bacteria every second. But they are equally important for conservation and sustenance of life. Until now whatever we have understood about phage biology has proven quite rewarding to human. The most illustrious outcome to be mentioned here is the CRISPR-Cas which has revolutionized the field of recombinant DNA technology. With more research and deeper understanding in this area of biology many more fantastic and beneficial surprises can be unraveled.

But for now, let us wait and watch the course of Phage therapy, whether it will rise to give us the panacea against bacterial pathogens or will it also face the same consequences of antibiotics. With this note, I am signing off today but do let us know What is your opinion on Phage therapy? Will it succeed or will it fail?

[su_box title=”Today’s Voice of Biotecnika is” style=”glass” radius=”9″] Dr. Sunita Adak, a pro-active faculty member of Biotecnika. She has specialized in Microbial Biotechnology

from IIT Kharagpur and is experienced in subjects like Cell Biology and Immunology. Being a passionate educator, Dr. Sunita keeps herself up-to-date with current research and shares the same with her students through after lecture activities like Pictionary, discussions, etc. She encourages each one to reach their full potential and has been an influential role model. [/su_box] 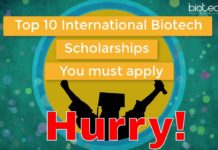 Top 10 International Biotech Scholarships You Must Apply For! 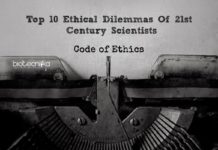 Top 10 Ethical Dilemmas Of 21st Century Scientists – A Must Read

Drug Use in the Ancient World

READ  Top 10 International Biotech Scholarships You Must Apply For!