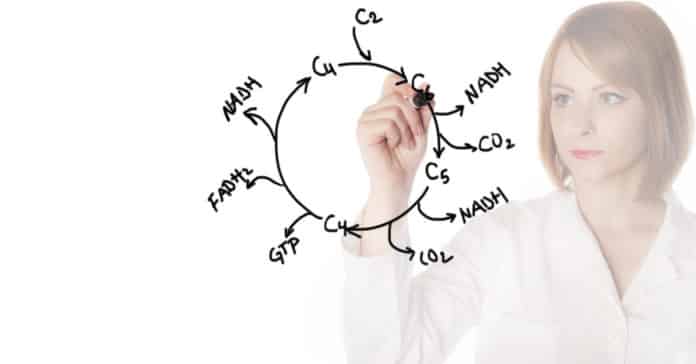 Krebs cycle without catalyst: a study that alters the fundamental understanding of the origin of life

A new study is published on the 16th of October in the journal Nature Chemistry by Trent Stubbs, a recent graduate from Furman University. Stubbs has authored a study that may fundamentally alter the understanding of the ‘origin of life.’

Krebs cycle, also known as the citric acid cycle, is one of those elemental metabolic processes. The Krebs cycle has been replicated synthetically for the first time by Stubbs and Professor Greg Springsteen, Furman University, in this research.

Professor Springsteen described the research and said that Trent figured out how to make the Krebs cycle run with some small molecules. The cycle runs in the water at mild pH  without enzymes. Discoveries like these have potential applications in answering the questions related to how life might have started on Earth and where else in the universe, it has the potential to emerge next.

The hypothesis of the study was formed by questioning “what’s fundamental to life?”

Stubbs sought the answers to questions like, ‘what is found in the living cells?’, ‘Among the core components, which of the components existed since the beginning?’ and the answer to such questions is the citric acid cycle. Food is turned into energy by one of such processes. Whether you’re human, plant, lizard, or anything, it doesn’t matter; it is likely that this cycle existed near the origins of life, and this is exactly what the paper talks about— the cycle that requires complex biological machinery to operate, has operated in its simpler version from the beginning with the presence of the evolved hardware.

SEE ALSO
All About Extremophiles & Its Research Applications

John Rennie, the deputy editor, Quanta, stated that the discovery’s significance, along with the researchers’ originality and rigorous expertise in the chemistry, was hailed by other scientists.

The research behind the study was the product of Springsteen’s role as a theme leader for a collaborative effort called the Center for Chemical Evolution between the National Science Foundation (NSF) and NASA research consortium. Springsteen specializes in the understanding of life and its origin by applying the principles of mechanistic organic chemistry. Springsteen and his students have been working for over a decade with the idea to unravel the mystery behind the evolution of natural chemical reactions into a self-sustaining network of metabolic reactions.

Springsteen was among the eight national Henry Dreyfus Teacher-Scholar Scholars named in 2018. The federal grants written by Springsteen have brought in over $1 million for research and funding of instruments to Furman over the duration of five years.

Metabolic flux analysis is a diagnostic method for the detection of emerging cancer and bacterial infection, and Stubbs’ discovery paved the path to novel ways of chemically synthesizing biological diagnostic agents for Metabolic flux analysis. Springsteen recognized the commercial potential of the results, and in July of 2018, Aconabolics LLC was launched. Lab space is specially constructed on campus for operating Aconabolics LLC.

Springsteen and Stubbs created two patents from this study: the second and third patents for Furman.

This study is the culmination of work carried out by Stubbs and Springsteen in a period of three years. Mahipal Yadav and Ram Krishnamurthy from The Scripps Research Institute has put in substantial inputs in the manuscript.

Krebs cycle without catalyst: a study that alters the fundamental understanding of the origin of life

Extremophiles Research Applications You must have come across reports of research conducted on Extremophilic bacteria. Extremophiles are organisms that can survive in environmental conditions that...
View Post
News

Career And Scope Of Mycology  Mycologists study the properties of fungi, for example, mushrooms, molds, truffles, yeasts, and lichens. They also study how fungi can...
View Post
News

Extremophiles Research Applications You must have come across reports of research conducted on Extremophilic bacteria. Extremophiles are organisms that can survive in environmental conditions that...
View Post
News

Career And Scope Of Mycology  Mycologists study the properties of fungi, for example, mushrooms, molds, truffles, yeasts, and lichens. They also study how fungi can...
View Post