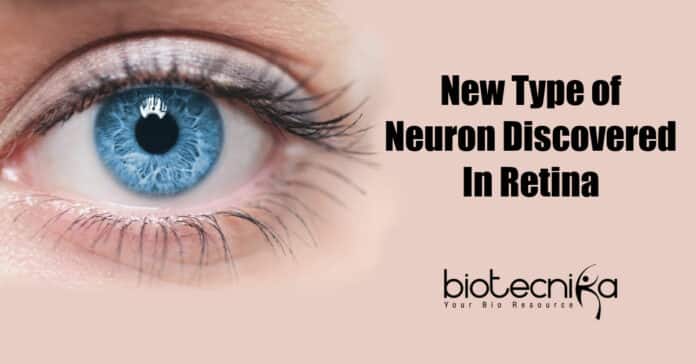 A new type of nerve cell (neuron) has been discovered in the retina by scientists from John A. Moran Eye Center, University of Utah.

A complex circuitry of neurons interacts with each other in the CNS to send sensory and motor information; interneurons act as mediators in the transmission connection.

A team headed by Ning Tian, Ph.D., identified a previously undiscovered class of interneuron in the mammalian retina, the study outcomes are released in the PNAS.

This interneuron shares some morphological, physiological, and molecular characteristics with retinal bipolar cells, like receiving input from photoreceptors and transmitting visual signals to retinal ganglion cells.

The finding is significant in the domain as scientists strive to better understand the CNS by identifying all types of neurons and their connections.

Tian stated that based on its morphology, physiology, and genetic characteristics, this cell does not belong to the 5 classes of retinal neurons discovered more than a century ago. They propose that they may constitute a new retinal neuron class.

The team named the newly discovered cells – Campana cells, as their shape resembles a handbell. Although their exact function is unknown, these cells transmit optical signals from both cone photoreceptors and light-sensing rods in the retina. Analyses revealed that in response to a 10-ms light flash stimulation, these cells remained activated for a surprisingly long time – up to 30 secs.

Tian stated that persistent firing cells in the brain are thought to be associated with memory and learning. As these cells exhibit similar behavior, they hypothesize that they could have a role in inducing a temporal memory of a recent stimulation. These cells may play an atypical role in vision.

The research was financed by the NIH and Research to Prevent Blindness, New York.

BioTecNika Global is your Global Biotech Network which keeps you updated about the global Biotech & Life Sciences Industry and shared the latest Jobs, opportunities, Exam Alerts, Admissions, Startups Report and much More. After its mega Success in the Asian Subcontinent, Now BiotecNika has launched its Global Web Portal at www.biotecnika.com Contact us: info@biotecnika.com