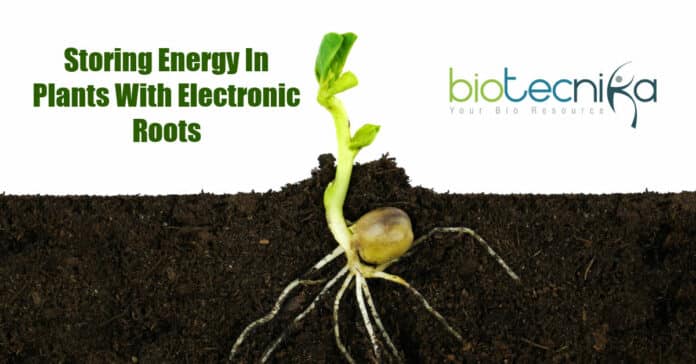 Scientists at Linköping University’s Lab of Organic Electronics demonstrated that by watering bean plants (Phaseolus vulgaris) with a solution containing conjugated oligomers, the roots become electrically conducting and can serve as energy storage.

Assoc Prof. Dr. Eleni Stavrinidou,  Principal Investigator, Electronic Plants Group, Laboratory of Organic Electronics, demonstrated circuit fabrication in rose vascular tissue in 2015. The conducting polymer PEDOT was absorbed by the plant’s vascular system, resulting in electrical conductors utilized to make transistors. She later determined in 2017 that a conjugated oligomer, ETE-S, could polymerize in the plant and form conductors that can be utilized for storing energy.

Eleni Stavrinidou stated that they had previously worked with plant cuttings that were capable of absorbing and organizing conducting polymers or oligomers. Plant cuttings, on the other hand, can only endure for a few days and the plant ceases to grow. In this new research, they used whole plants, a common bean plant grown from seed, and showed that when the plants are watered with an oligomer-containing solution, they become electrically conducting.

The team here used ETE-S, a trimer that is polymerized naturally in the plant. A polymer conducting film forms on the plant’s roots, causing the complete root system to function as a system of easily available conductors.

The roots remained electrically conducting for at least 4 weeks, with a conductivity of about 10 S/cm.

The team studied the likelihood of storing energy in the roots and created a root-based supercapacitor in which the roots served as electrodes during charging and discharging. Eleni Stavrinidou stated that the supercapacitors based on conducting polymers and cellulose are an ecologically sound alternative to economical and scalable energy storage.

Eleni Stavrinidou noted that the plant exhibits a more complicated root system, but otherwise is unaffected – it proceeds to develop and produce beans.

The findings, which were issued in the journal Materials Horizons, are extremely important not only for developing sustainable energy storage systems but also for developing new biohybrid systems like functional materials and composites. The electronic roots also make a significant input to the advancement of seamless communication between electronic and biological systems.

BioTecNika Global is your Global Biotech Network which keeps you updated about the global Biotech & Life Sciences Industry and shared the latest Jobs, opportunities, Exam Alerts, Admissions, Startups Report and much More. After its mega Success in the Asian Subcontinent, Now BiotecNika has launched its Global Web Portal at www.biotecnika.com Contact us: info@biotecnika.com