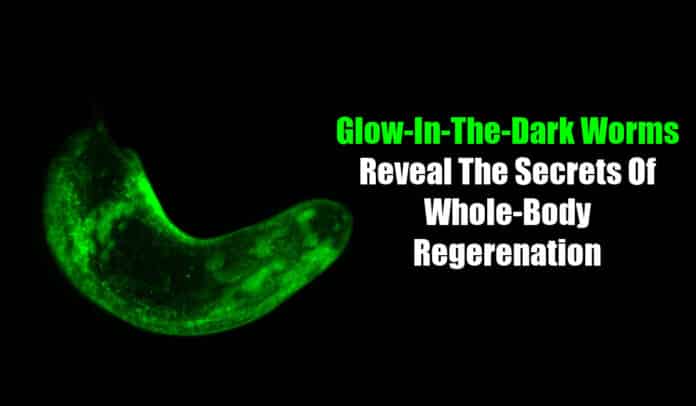 As for whole-body regeneration, three-banded panther worms are the best ever model organisms. This is the main reason why researchers began exploring these tic-tac-sized worms so as to understand their regeneration mechanism. Recently, a group of scientists took it up a notch by allowing these worms to glow in the dark.

The details of the new study are explained in an article published in the journal Developmental Cell. The study was supervised by Harvard’s evolutionary & organismic biology professor, Mansi Srivastava, who was also the first person to collect three-banded panther worms as a model organism in the year 2019 for studies.

Even though ‘glow in the dark worms’ sound fancy, scientists claim that it is much more than that.

These glow-in-the-dark worms or more scientifically the ‘transgenic worms’ are created by the process called transgenesis. During this process, an organism’s genome is altered by introducing a foreign substance into it. Srivastava added that this is a technology employed by biologists to examine the functioning of tissues or cells within the animal’s body.

The factor that induces the glow-in-the-dark effect is a gene that expresses a fluorescent protein. These proteins either exhibit red or green light and give glowing skin cells or muscle cells, for instance.

This fluorescent nature of the protein enables scientists to study and observe the cells and their interactions in a much detailed way.

Additionally, scientists can take away or add particular information to the worm’s genome. The degree of accuracy for tailoring the genome and visual resolution makes transgenesis so powerful. This enables scientists to explore the distinct mechanisms of an organism.

For three-banded panther worms or Hofstenia miamia (a marine animal called acoel worm), scientists can perform accurate tailoring like turning off a few genes. This could possibly lead to regeneration mistakes such as growing 2 heads instead of 1 or growing tail instead of head and that too in the wrong place. This could eventually help researchers to properly identify the genes needed for this worm to regenerate its whole body perfectly.

Currently, with the tools and technologies available to develop transgenic worms, scientists claim that they are thrilled to explore a stem cell population that is important for regeneration. These cells are known as neoblasts and are supposed to be pluripotent, which means these cells can form any other animal cell type like gut cells, muscle cells, skin cells, or neurons.

Already, transgenic worms helped scientists in uncovering new information regarding the mechanism of connection between the worm’s muscle fibers & other cells like those in the gut & skin as well as their connection to each other. Scientists found that muscle cells have additional parts similar to a skeleton that keep a closely-knit grid and interlock in tight columns for support & structure.

Scientists are curious whether the muscles can carry out multiple functions besides holding things together like communicating and storing information about the things to be regenerated.

It takes around 8 weeks to create a transgenic worm line and the Srivastava laboratory has perfected this process. During this process, they introduce the altered DNA into the fertilized embryos. Both the alterations and the DNA gets incorporated into the cellular genome during cell division. When the new worm fully develops, it will begin to glow and this trait will be passed on to future generations.

Srivastava has been working on these worms for the last 10 years since she retrieved 120 worms from Bermuda while she was doing her postdoctoral research at America’s Whitehead Institute. She joined the Department of Evolutionary and Organismic Biology at Harvard and started a research project with a specific focus on stem cells and regeneration in panther worms in the year 2015. During another study in 2019, Srivastava along with her team discovered many DNA switches that regulate whole-body regeneration by controlling certain genes in the worms.

Srivastava and her colleagues have gotten attached to these worms, their intriguing behaviors (from their mechanism of mating to insatiable predation and even cannibalism) as well as their striped patterns after studying them for so long. Scientists mentioned that if these worms are starved for a while and they will start eating their own kind. Whole-body regeneration is quite useful here, however, bigger worms can fully eat smaller worms.