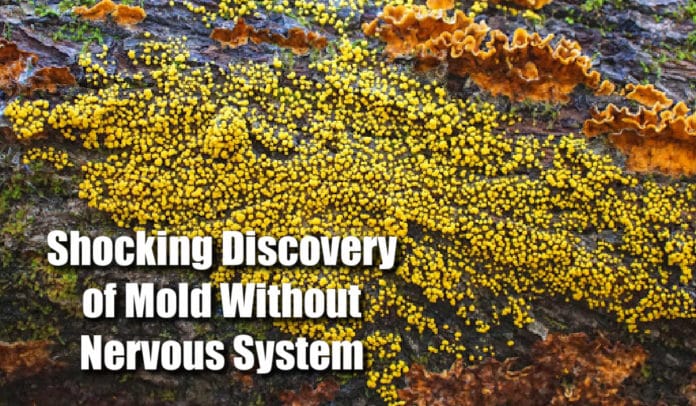 Researchers Have Discovered A Slime Mold Without Nervous System

Having a memory of previous events allows us to make smarter decisions for the future. Scientists at MPI-DS (Max-Planck Institute for Dynamics & Self Organization) & TUM (Technical University of Munich) have recently determined how the slime mold Physarum polycephalum conserves its memories-despite the absence of a nervous system.

The potential to store & retrieve information provides an organism a great advantage when seeking a food source or circumventing harmful environments. Conventionally, this has been possible for living things having a nervous system.

New research contributed by Prof. Karen Alim (MPI-DS & TUM) and Mirna Kramar (MPI-DS) challenges this notion by discovering the astonishing potential of a highly active, unicellular organism to store and recover information regarding its surrounding.

Window to the past

The slime mold Physarum polycephalum has been baffling scientists for several decades. Present at the junction of kingdoms of fungi, plants, and animals, this peculiar organism offers insight into the primitive evolutionary history of eukaryotes-to which humans belong as well.

The organism is a huge unicellular body made up of meshed tubes that form complex networks. This single amoeba-like cellular body might elongate many centimeters or even meters, presenting as the biggest cell on our planet in the Guinness  World Records.

Decision making on the most fundamental aspects of life

The striking potentials of the unicellular slime mold to resolve intricate issues like seeking the smallest route via a maze received it the title “intelligent”. This pondered the research team and aroused questions regarding the decision-making on the fundamental aspects of life.

The decision-making potential of Physarum is particularly interesting provided that its tubular mesh continuously undergoes quick reorganization-multiplying and disintegrating its tubes-while entirely lacking an organizing core.

The scientists uncovered that the organism forms recollection of food encounters straight into the network architecture body ad employs the saved information when making future choices.

The network architecture as a reminiscence of the past

Karen Alim, head of Morphogenesis & Biological Physics division at MPI-DS & professor of Theory of Biological Networks at TUM stated that it is really exciting when a study is developed from a very simple empirical observation.

When the scientists followed the movement & feeding process of the mold, they found a unique marking of a food source with a pattern of thick & thin tubes of mesh long after feeding.

Karen Alim claimed that provided P. Polychephalum’s highly active network restructuring, the persistence of this marking stimulated the concept that the network structure itself can play the role in the memory of the past. Nonetheless, they initially required to elucidate how the imprint was formed?

Decisions are directed by memories

For this, the scientists merged the microscopic findings of the familiarization of tubular mesh with theoretical modeling. When encountered with food, it triggers the discharge of a chemical that traverses from the site where food was detected throughout the organisms and elongates the tubes in the network by softening, enabling the entire body to reshape for migrating towards the food.

The lead writer Mirna Kramar asserted that the slow softening is where the already present markings of past feeding come into play & where information is saved & recovered. Previous feeding occurrences are integrated into the hierarchy of tubular diameters, particularly in the organization of thicker and thinner tubes in the meshed network.

Mirna Kramar added that thick tubes in the mesh serve as highways in traffic networks for the transportation of the softening chemical, facilitating fast transport across the entire organism. Past encounters marked in the network-like architecture hence weigh into the choice regarding the future migration direction.

Layout based on universal principles

Karen Alim stated that provided the simplicity of the live network, the potential of Physarus to make memories is fascinating. It is extraordinary that the organism depends on such a simple dynamic and still regulates it in such a refined way.

Karen Alim concluded that these findings offer a significant fragment of the conundrum of this old organism and parallelly highlight the universal principles behind the behavior. They hope for potential applications of their outcomes in creating smart materials and constructing soft robots that steer through complex surroundings.