Plants have a specific and very well-organized defense mechanism against injuries and infections. This plant defense mechanism is useful against the destruction of plant parts caused by herbivores, including caterpillars. This is a result of evolution over millions of years.

Plant biologists have been trying to figure out the mechanism underlying this defense for ages. The exact knowledge about it will help in working on solutions to the problems in plant health. This, in turn, will aid in increasing yields of high quality by managing crop damage by pests and developing stronger food webs by genetic engineering.

Proceedings of the National Academy of Sciences had published an online form of their journal where researchers revealed details of a biological switch involved in plant defense mechanism. Scientists at the University of California, San Diego, have discovered a receptor in plants that alerts them when they sense an attack from a herbivore. The scientists from the university’s Department of Biological Sciences who worked on it were led by Eric Schmelz, Adam Steinbrenner, and Alisa Huffaker.

Heterotrophs that derive energy from the consumption of autotrophs like plants include insects, animals, and humans. This forms the basis for interaction between biological entities. Scientists discovered more than thirty years ago that plants have the ability to sense attacks by herbivores. 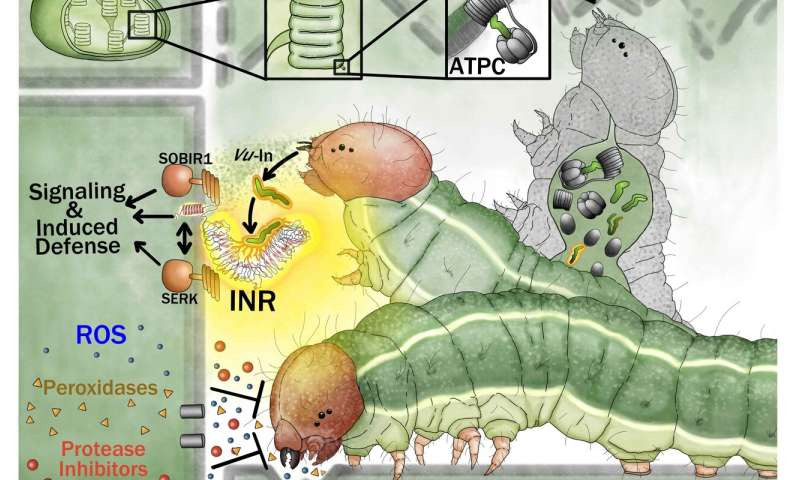 While humans have immune systems consisting of cells and organs, plant defense mechanisms are immune responses. The scientists conducted experiments on bean plants where they found inception receptors (INR). They used forward genetics, which is a method of finding genetic variations. When caterpillars eat a plant, they accidentally eject plant proteins as biological waste from digestion. Some of these proteins are highly conserved and detected by the INR.

First to be recorded

Schmelz worked on the deconstruction and grasping of the evolutionary connection between herbivores and plants. He acknowledged the fact that the INR was the first plant defense mechanism to be recorded. It answers many fundamental questions of plant biology.

Not just in beans, but this and similar receptors may be discovered in many plants. Such receptors can be used to increase the protection and yield of crops that are necessary for humankind.

Schmelz further spoke about the possibility of thousands of such mechanisms that can be used to offer enhanced protection to crops waiting to be unraveled by the scientific community.

Biotech industries are burgeoning all around the world with increasing demands for biotech professionals with adequate experience in various global markets. Likewise, the biopharma...
Read more

Biotech industries are burgeoning all around the world with increasing demands for biotech professionals with adequate experience in various global markets. Likewise, the biopharma...
Read more